On this Thankful Thursday I am thankful that my little girl was given the opportunity to be assessed for an Autism Spectrum Disorder. 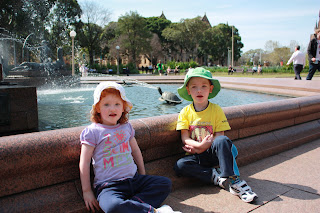 This was a big deal, as she only got assessed yesterday as they had a spare spot. Autism Spectrum Australia  (ASPECT) only come out this way once a year. And there are so many boxes you have to tick to get seen. One was parent must have a health care card. This was the problem. My kids have cards but I don't. We are on an income where we earn too much to get one but not enough to be classed as high income earners. That annoying middle ground.

Anyway, they had a space. So someone would assess her.

During the assessment they try to interact with the child and to play with them and see what they do with certain toys. Well all I can say is that The Princess performed to her true self.  As the assessor said "she has an aversion to dolls". The Princess had no idea what she was expected to do with the doll or the little family to play house. But she did know how to spin the coloured CD spinner on the table.
And she was very happy to talk to the assessor about the colour green and the number 3. (Yes  having a real thing for the colour green and the number 3 is classed as a bit odd.) But she didn't have too much else to say.

After the play session I was interviewed and asked a lot of questions.

So The Princess is now officially on the Autism Spectrum. Not sure exactly where on the spectrum, will have to wait till the report comes out. But really it doesn't matter, where she falls on the spectrum. The spectrum is huge and every child is different.

So I got the diagnoses so what now????
Nothing really. Our day to day life wont change too much as I have been thinking of her as been on the spectrum for over a year now. All it means is that we will get the funding we need and that The Miner now has to learn to accept it.

Oh and lastly not only was I thankful of The Princess been assessed, but the fantastic staff member from our Early Intervention who sat in with us.

For more Thankful Thursdays go over and see Kate.

hi, glad to know that you managed to get a slot when it's so hard to! all the best to you and your family in this new journey after the diagnosis :)

Like you said, even though it doesn't make a huge difference to your lives, at least you have the support and funding now.

So glad you were able to have that assesment, so you can now access some support and funding.
I'm glad the diagnosis has allowed you to start making those next steps.
Take care. xx

We reside in the middle ground too, and it can be a tricky and frustrating spot indeed!

I'm so glad you were able to get the assessment. And that you weren't given any shocks at the outcome too.

Yellow and six here by the way ;)

We recently got an Aspergers diagnosis for our 6 yo girl (after earlier receiving a High Functioning Autism diagnosis for our 7 yo boy). Having the diagnosis does help in obtaining funding and sometimes also helps in getting others in our lives to accept what is is front of them. (I can relate to this as I had to fight to get my son's diagnosis on my own as my husband couldn't accept it - he is my absolute rock now). I wish you all the best for The Princess - ASPECT are gold, my son has been schooled by them for 3 years and has also received early intervention and they are worth every penny!

Sarah
Forest Reefs, NSW, Australia
I live on 5 acres with 3 kids and and my husband, the miner. I spend my time trying to make and bake and grow different things in our life