Christmas isn't too far away.
And like most years I am not ready for it.

And I found it 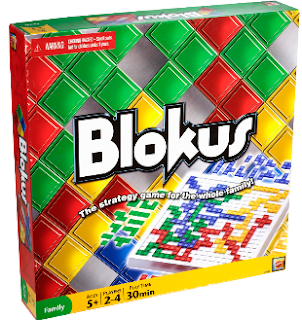 It is called Blokus
The box says ages 5+ but Mr Magoo 5 and The Princess had no problems at all in understanding how it worked. 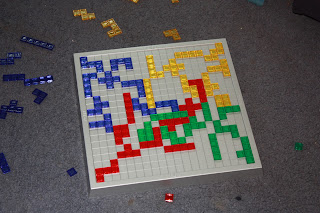 Its a puzzle like  game  where you try to get all your  pieces down while also limiting the other players of where they can go.
Towards the end of a game the kids (mainly The Princess) would need help But most of the game they could play independently.
The game is best played with 4 players. If playing with 2 players they use two colours. We also play with 3

It is a quick game too which I love. As it can be done in that spare half an hour of an afternoon when the kids need calming down.. 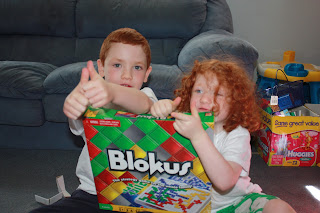 It got 2 thumbs up from the kids
We just loved this game and have played it many times﻿.
So if you would like a copy of the game
Get to the shops and buy one. I have seen it in a few of the big chain stores. So it is out there!
And if you want to see what other toys are out there this year go to the Mattel
I was not paid for this review but given a copy of the game.
Sarah xx
Posted by Sarah at 5:36 AM

Sarah
Forest Reefs, NSW, Australia
I live on 5 acres with 3 kids and and my husband, the miner. I spend my time trying to make and bake and grow different things in our life